Warning: Invalid argument supplied for foreach() in /home/trekaddictco/public_html/wp-content/themes/skiaddicts/single-parts/top-image.php on line 27
Best Scenic Trails in the UK

There are so many spectacular destinations to be explored in the UK.

Whether you are a seasoned hiker or a beginner, there is a trail to suit every level.

Below, you will find a selection of the 10 most scenic trails to walk and hike in the UK.

Starting at Chipping Campden and ending at Bath, the Cotswolds Way hike is 163.2 km (just over 100 miles), through Wiltshire and Gloucestershire.

The hike should take a fit person about 8 days to complete, especially if you devote some time to enjoy the picturesque Cotswold villages, field and forests. 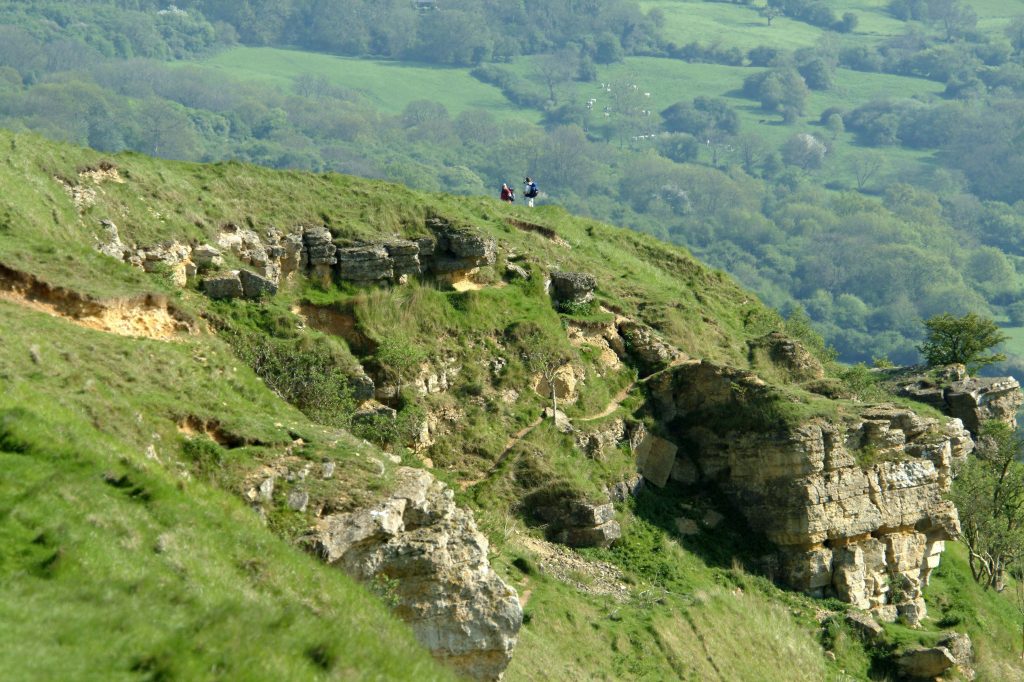 The Winchcombe Way, a 67,5 km hike in a figure-of-eight shape, encompasses highlights of the Cotswolds, passing through valley, woods and villages to the impressive Stanway House and a restored watermill.

You proceed onto Hailes Abbey up Langley Hill with remarkable views of Broadway Tower. 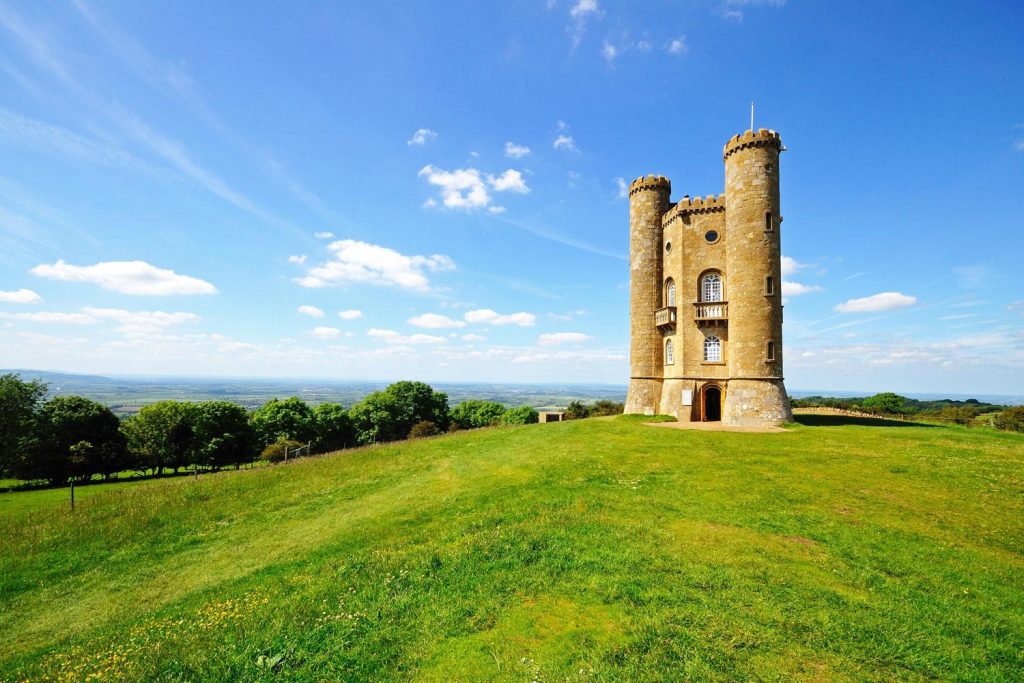 Skirt around Dumbleton Hill, through Alstone to Cleeve Common with its rare plants and on to Winchcombe with views of Sudeley Castle.

If you wish an even shorter route, opt for the 10.4 km walk across Cleeve Hill & Common with stunning views of the Malverns and Wales.

The old English name of the hill is Cleeve Cloud or ‘Lump on a Cliff’.

This 7-mile (11.5 km) circular walk starts from Kynance Cove and passes above Pentreath beach, where you can see the dis-used Victorian lifeboat station at Polpeor Cove, a gloomy reminder of the numerous shipwrecks that have occurred along this southern-most coast of England.

Walk on to the Lizard lighthouse and Lion’s Den, a 12-metre hole in the heart of the cliff, made by a cave collapsing in the mid-1800s.

The scenery is dramatic, teaming with rare wildflowers and wild asparagus (depending on the time of year), plus a very interesting coastal history. 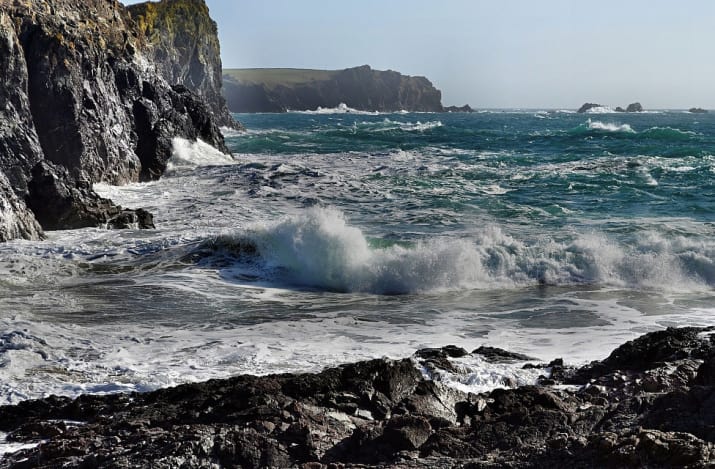 Hikers often see seals and the Cornish national emblem, the clough which was extinct in England until the start of the century, when three flew in from Ireland and started the now-thriving colony.

The most exciting route up Britain’s third highest mountain (590 metres high) lies hidden along the Striding Edge, but you need a head for heights, as it is an exposed knife-edge ridge.

This challenging trek of 5½ hours is rated as the best way to summit Helvellyn.

There are several options when walking along the edge, you can either scramble over the top of the ridge or follow an easier path. 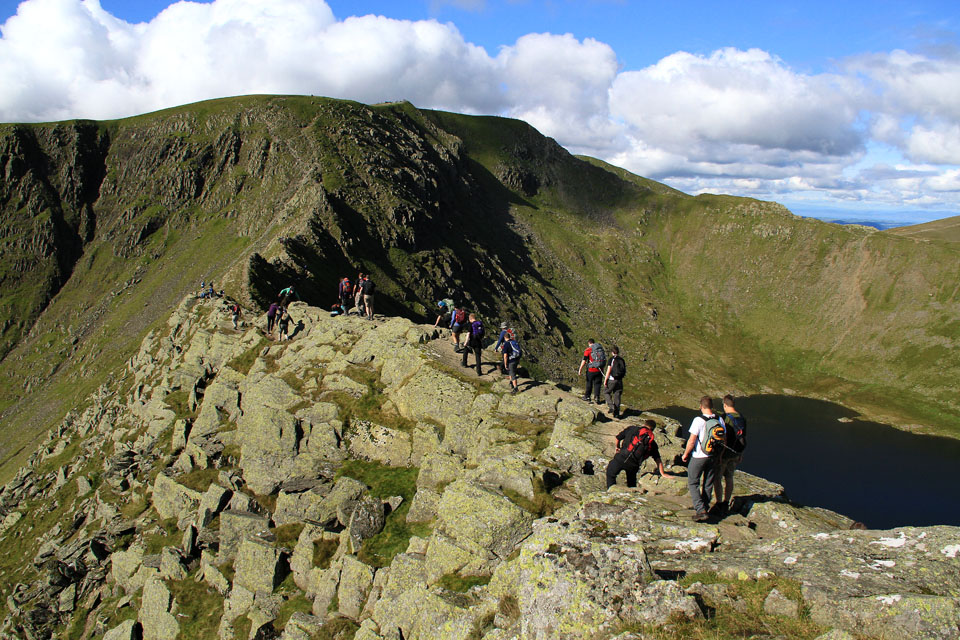 The advantage of summiting Helvellyn via Striding Edge is that you can start the walk from several different locations, such as Patterdale or Glenridding.

It is actually a horseshoe walk, descending via Swirral Edge.

Mosedale Horseshoe is a stunning hike of 17.4 km taking you through the most beautiful and isolated part of the Lake District to the summit of Black Crag; a moderate but long hike of about 5½ hours.

Scafell Pike is the highest mountain in England at approximately 1,100 metres but is not too tricky a route.

An average hiker will need about 6 hours to finish it. 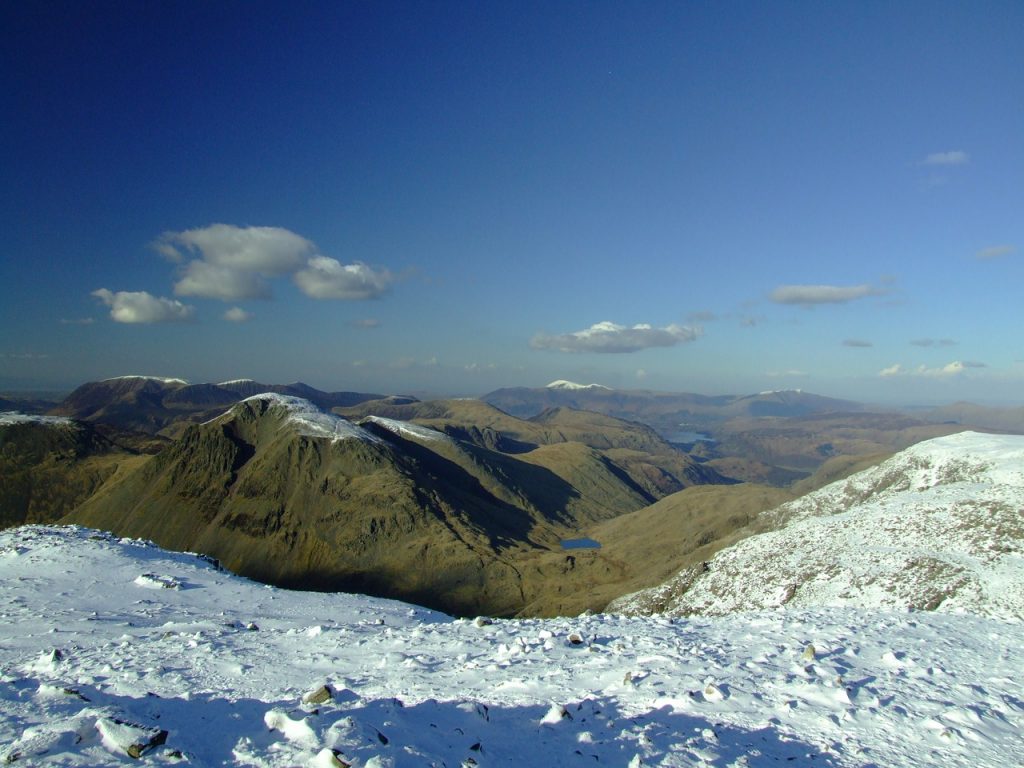 This is one of the most beautiful walks in England, especially in the spring.

The cove leads on over the ridge to the rock arch of Durdle Door, formed in the Jurassic period about 140 million years ago.

Layers of limestone and softer rocks were pounded by the sea, creating a series of hollows, arches and caves, ideal for smugglers. 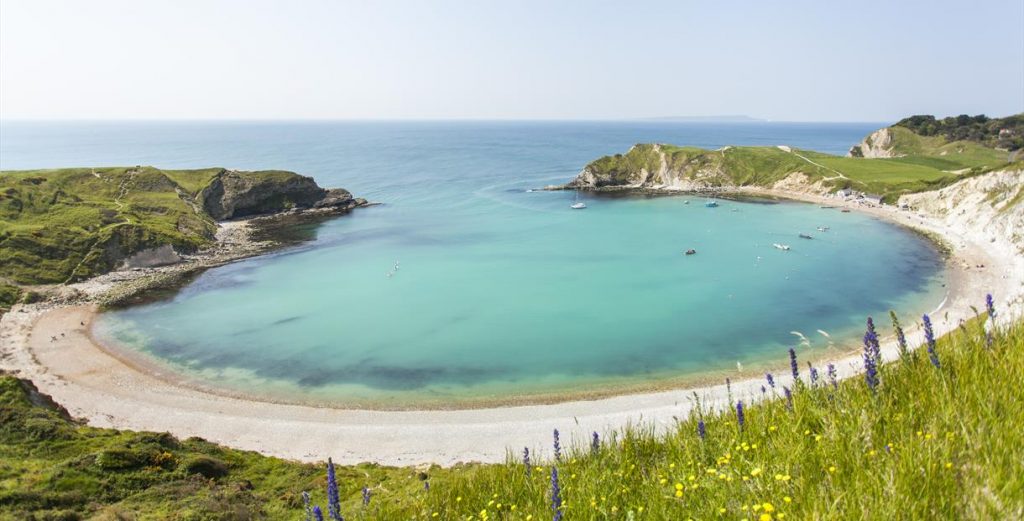 In the rocks above are the remnants of a petrified forest, drowned many millions of years ago, allowing you to tread on paths dating back to the Stone Age through this unique area.

The Jurassic Coast, which stretches over 95 miles between East Devon and my new home county of Dorset, is characterised by it’s grassy cliff tops, sheer drops of jagged white rock cliff sides and spectacular geology.

It should just take about 1½ hours, a we suggest a nice picnic en-route. It will give you a chance to enjoy the mesmerising water and the fantastic beach.

Walk into the past along the wall built by Roman Emperor Hadrian in AD 122.

It starts on the banks of the Tyne near the North Sea and runs to Solway Firth on the Irish Sea. It was the Northernmost limit of the Roman Empire.

Follow the wall 100 km from coast-to-coast, passing forts and settlements. It should take about a week – provided you are fit enough!

It is entirely worth it though – it will prove an unforgettable journey.

Try a 3 day short break or a 6-10 day walk over the entire length of the National Trail with operators such as Mickledore. 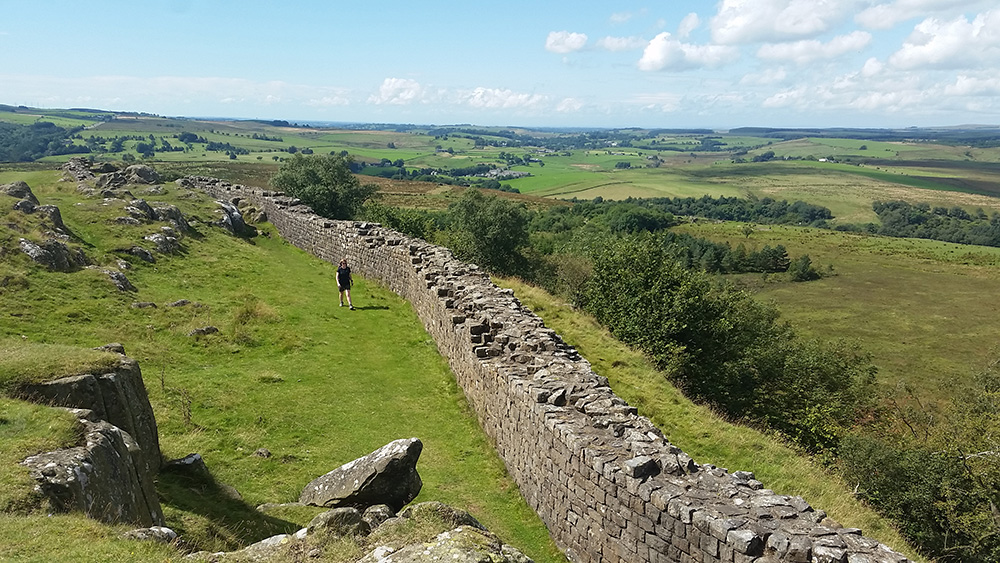 Start at Housestead Fort, pass various earthworks, pass to the north side of Hadrian’s wall, through woods above Crag Lough to Sycamore Gap to earthworks that were Steel Rigg.

There is a dip in the crags called King’s Wicket or Busy Gap.  In the 16th century ‘Busy Gap Rogue’ was a term of abuse to describe thieves.

It’s clear how difficult it would have been to attack the Fort.

If you live in London, you have easy access to this 161 km trail from Winchester, the old capital of England, along the coast and cliffs to Eastbourne.

It should take you roughly 8-9 days, offering a wonderful way to get away from it all. 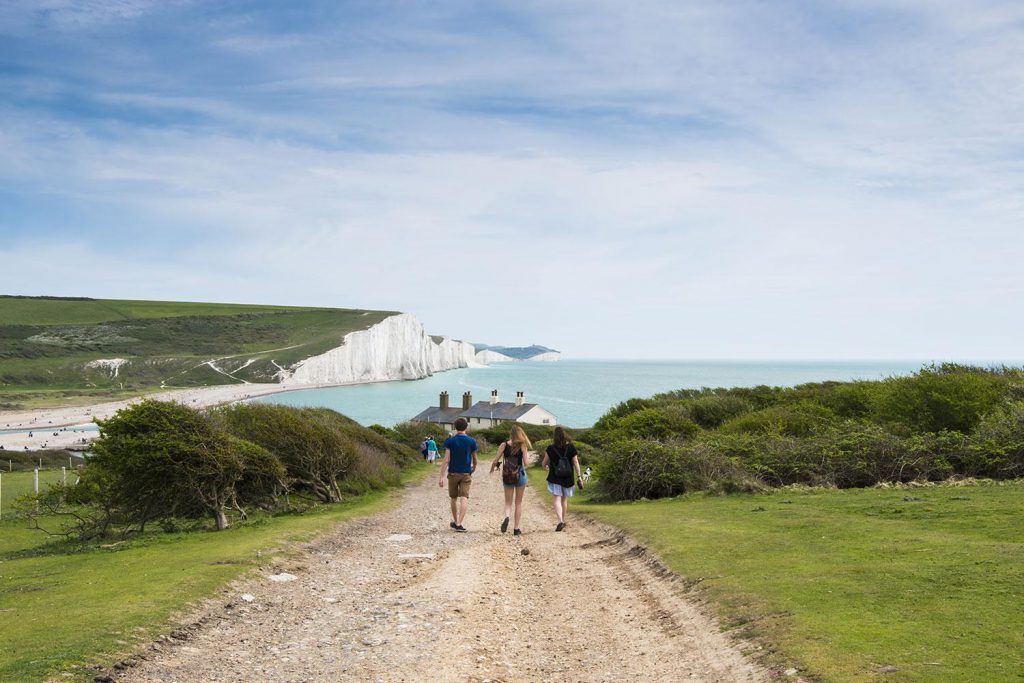 There are many short routes to choose from, each offering something unique for visitors

This walk is 17.7 km long, but do take time out to visit the Great Hall at Winchester Castle too, where you can see the legendary round table of King Arthur. 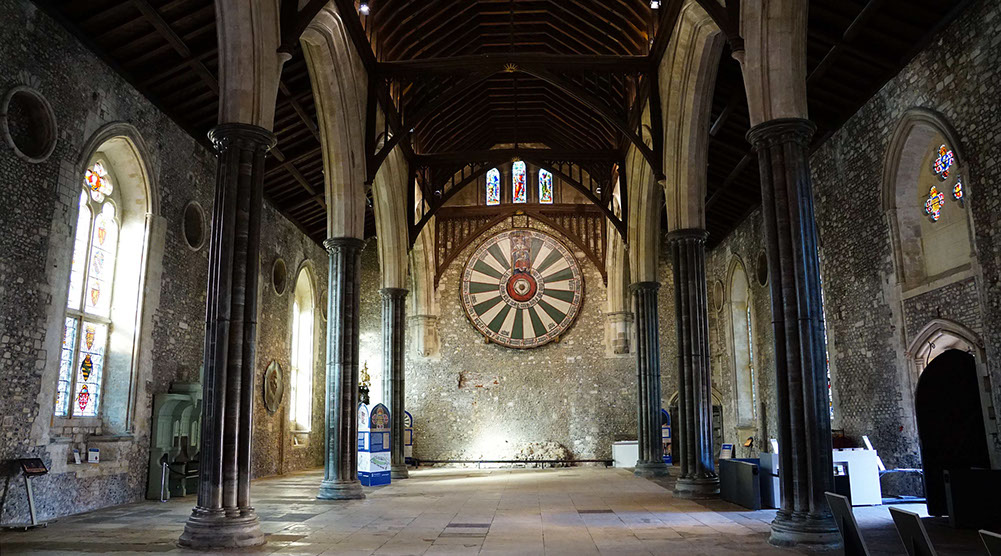 Follow the trail out of the city past the hamlet of Chilcomb and on to Cheesefoot Head (176 metres).  The view is marvellous towards the Solent and Isle of Wight.

That’s a short 7.2 km hike through a dramatically beautiful area which crosses the Meon Valley beside the river.  #

Hike along to the top of Winchester Hill, (197 metres) for unforgettable views of the valley covered in wildflowers, a rare variety of orchids and a maze of butterflies.

A 12.8 km long and complicated climb 600-metre high, reserved only for experienced hikers, taking about 5 hours.

It is considered the gateway to the 268 mile hike over the Pennine Way.

It is well worth the climb for the abundance of birds: ravens, red grouse, peregrine falcons, curlews and perhaps a ring ouzel if you are lucky.

Cross the rift made by the Kinder Downfall which was once a mighty waterfall, now just a trickle of its former self. 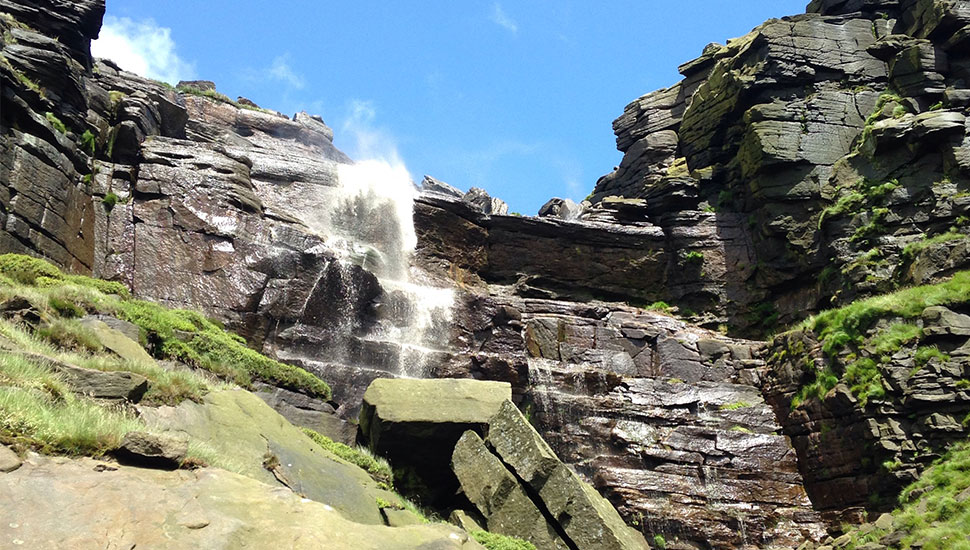 You can either go back the way you came or venture on through Bleaklow.  Take a compass in case of dense fog.

In bad weather and particularly in winter this walk is a tough undertaking, especially on the outward journey to the summit which crosses watercourses, peat hags and boggy ground.

Mam Tor (Mother Hill), or ‘Shivering Mountain’ as it is called locally due to its shifting nature, dates back to the Bronze Age and has burial mounds to prove it.  It is an easy walk taking just about two and a half hours with dramatic views. Just stroll by the river on the way back.

This mammoth and challenging Pennine Way trek is 412 km along the northern part of the backbone of England is only for truly seasoned hikers with 16-19 days to spare.

It starts from Edale in Derbyshire to Kirk Yetholm in the Scottish Borders – a must for serious hikers. 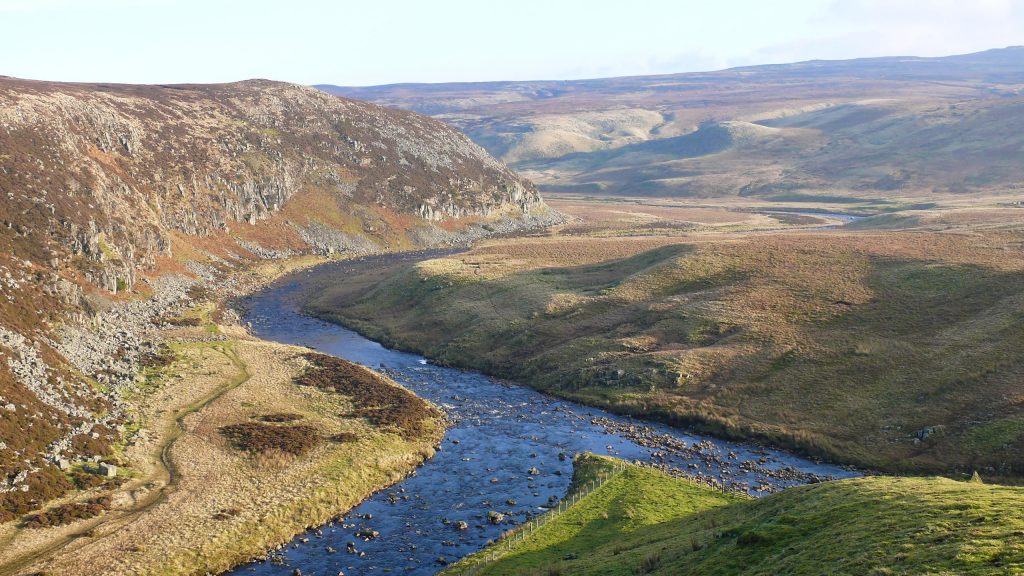 For a short hike try Malham Cove, a 90m amphitheatre formed by an immense waterfall rising higher than Niagara, and dating at least 10,000 years ago.

An awe-inspiring place haunted by peregrines, ravens and other birds. It is an easy 3.2 km circular hike from Malham village up the stairs to the left of the Cove wall.

At the top, you can see shelves of lynchets (Iron Age cultivation terraces) on the slopes of Shorkley Hill.

The trail takes you to the characteristic mountain of Pen-y- Ghent.  From its summit of almost 700 metres, it is an easy descent 5-miles to Horton-in-Ribblesdale.

This breathtakingly beautiful hike of 150 km, can be a life-changer.

Starting just outside Glasgow at Milngavie, it is moderately difficult and should last about 8-9 days.  Walk the length of Loch Lomond and even camp along the banks.

Pass through the lowlands, across the Highland Boundary Fault to the Scottish Highlands and on to the foot of Ben Nevis the highest mountain in Scotland. 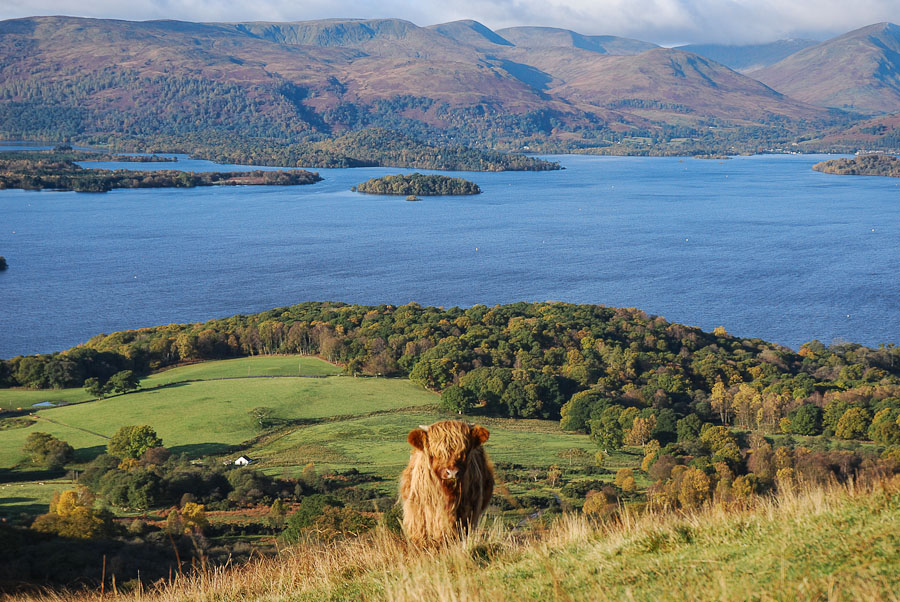 For a short hike, try the Rob Roy Way Circular.  It is an easy ramble from the village of Drymen for 3½ miles (5½ km) taking about an hour and a half, ending in Pitlochry.

Majestic Mount Snowdon peaks at 1,085m and is a must for experienced hikers. With six tracks to choose from, there is something for everyone.

You’ll need a minimum of 6 hours to climb up and down, but from mid-May until the end of October you can take the train down if necessary.

Do remember to reward yourself with a nice cup of tea at the café at the top.

Spectacular views abound but be prepared for abrupt weather changes! Dress warmly and take a raincoat just in case.

Watkin Path is the hardest of the six routes. Crib Goch, a seventh alternative is only for the most experienced climbers.  The other paths are easier.

Best Family Walks Scotland
Scotland has a lot to offer families, from great camping to

10 Best Long Distance Hikes in France
Like their wines, when the French do walks they often take

How Do I Get Fit For Mountain Climbing?
So you know you need to be in good shape – both mentally
©Copyright 2019 - skiaddict.co.uk