Sir Richard Branson, the 68-year-old billionaire Virgin owner was “seconds away from certain death” after being caught in a rockfall on Mont Blanc.

Richard was with a team of 13 which included his son Sam and nephew Noah Devereux, who were trapped as falling rocks “the size of small cars” crashed over their heads as they passed through an area known as ‘The Gully of Death’, before reaching the summit of Mont Blanc.

The 33-day Virgin Strive Challenge, a 2,000km trek across Western Europe, involved hiking, climbing, cycling and sea kayaking to travel from Sardinia to the top of Mont Blanc.

The challenge has raised well over £1 million for the charity Big Change which helps disadvantaged young people in the UK. 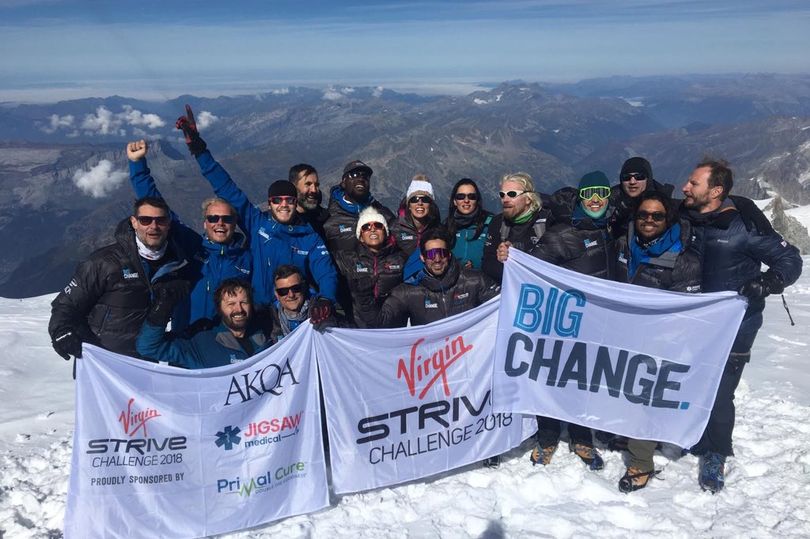 Mont Blanc is the undisputed heavyweight of the Alps, and the highest peak in Europe. A huge white dome surrounded by glaciers, huge alpine rock faces and stunning alpine scenery.

Combining high altitude, serious weather in any season, technical climbing, as well as the danger of rock fall, seracs and crevasses; the climb is a massive undertaking for all teams. 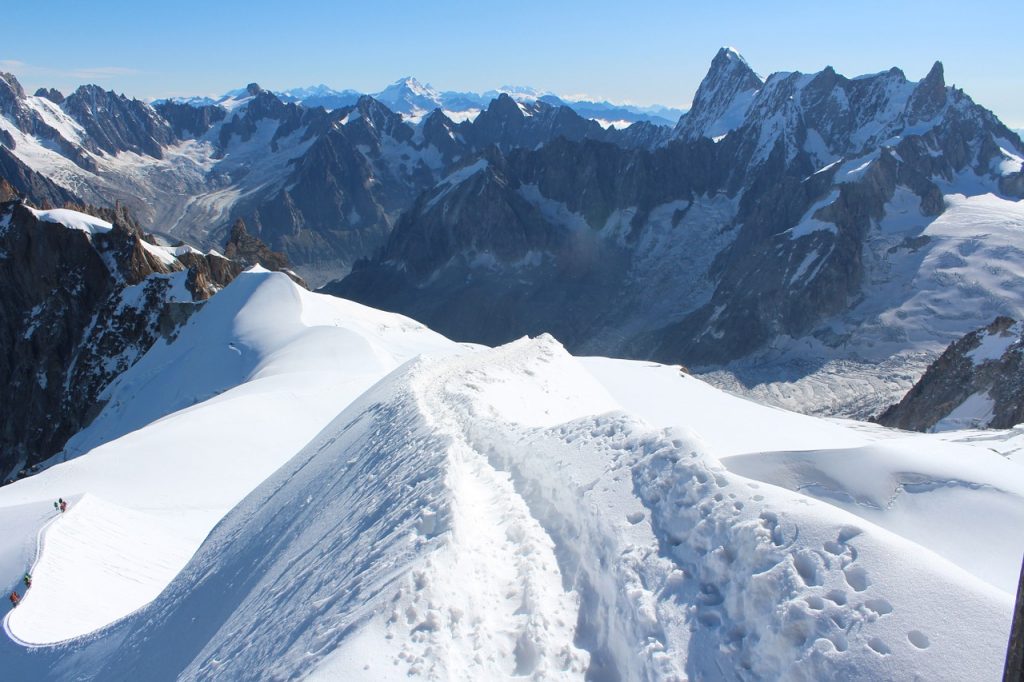 The view from Mont Blanc

We are lucky to be alive. Three seconds earlier we would all certainly have been killed.

Throughout all of our challenges I have never come so terrifyingly close to losing myself, my son and other team mates and it all happened in a matter of seconds.

A side of a cliff had broken away from the mountain further up and seconds later huge boulders the size of small cars were bouncing towards us. Rocks rained down on us from every angle.

We’d enjoyed a great day’s climb and were approaching our final hurdle before reaching our base for the night – the dangerous 100 yard crossing that is the Gouter Couloir.

It is known to some as the ‘Gully of Death’ – as we found out for a good reason – but at this time of year our guides were confident that we’d be safe to cross it.

Within seconds of getting across we heard the most horrible sound. A side of a cliff had broken away from the mountain further up and seconds later huge boulders the size of small cars were bouncing towards us.

Rocks rained down on us from every angle. I am not exaggerating when I say four of our team were seconds away from certain death.

Sam Branson, posted a video of the incident to his Instagram account, after they had all safely returned, and gave an insight to what they had experienced:

Didn’t want to mention it till we were all down safe and sound but we had a very very close call on the climb. 10 seconds later and @susiematropic @jamesbenamor @richardbranson and I would most likely not be here to tell the tale. A tower of boulders defended down the mountain in the grand couloir and one rock even hit my helmet. Was a very scary time. That one section takes 20 lives a year 😬⛰ #westrive #striveforabigchange @virgin @strivechallenge @bigchangecharity

“We were hiding in fear, not knowing whether the rocks were falling directly on us or to the side – there was an overwhelming array of emotions.”Sam Branson

Simon Lowe, Managing Director of mountain guides Jagged Globe, said on Twitter that his team felt the route was too hazardous to cross earlier in the week.

It’s not the “gully of death” it is called the “Grand Couloir”. #jaggedglobe last team of the season turned around there on Wednesday, realising it would be foolish to cross & then cross again on the way back down, even if that meant missing the summit. https://t.co/R3Pz6lIfGZ

“God forbid, a few seconds earlier it would not have been as pretty – so I’m very thankful we got through it”.Sir Richard Branson

The team did at least get time to enjoy their summit before they were picked up by a helicopter, after agreeing that attempting the path back down was not worth the risk.

6 video’s of awesomeness: Can’t quite believe it! This year’s challenge has seen myself, my @strivechallenge co-founder @noahdevereux and our core team travel 2000km and over 4 times the height of #Everest in 33 days. 6 years ago we launched @bigchangecharity here and have since travelled over 6000km under human power and raised over £6million to invest in game changing projects to help young people thrive in life not just exams. Thanks for all your help to change the system for good and unlock young peoples potential now, not just in the years to come! Feel grateful to have reached this monumental moment! Well done for all who have taken part over the years and supported the effort to make a #BIGCHANGE 💙 👏🏻 to this year’s core team for an incredible effort! @virgin @strivechallenge Wow just Wow!! 😇😇😇 #westrive #striveforabigchange

We’re glad everyone made it back safe and congratulate Sir Richard, Sam and all the team on such a remarkable achievement!

Start with a few steps and they’ll soon turn into miles. 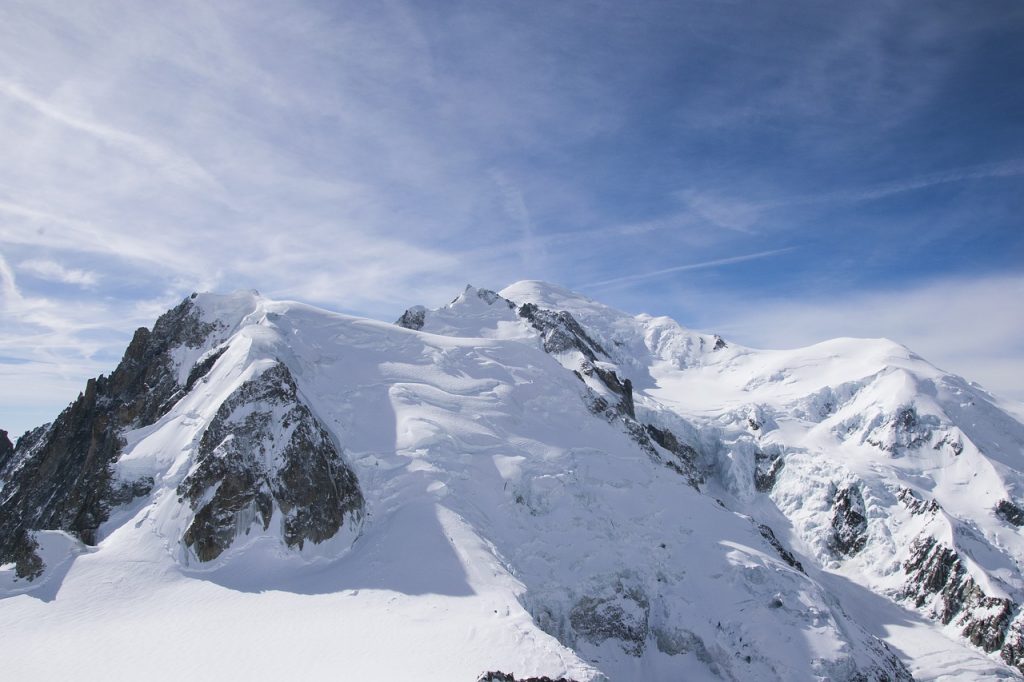 Mont Blanc is the highest mountain in Europe

Best Hiking and Mountaineering Films for Lock-down 2020
We're all stuck in, still dreaming of the mountains! So why not use this time to check out some of the best hiking, climbing and mountaineering films, to

The Best Hikes in Las Vegas
There is more to Las Vegas than being the ‘sin city’ of the planet. Behind the flashy clubs and uncensored nights, the place abounds in natural

A Brief Guide to Mountain Weather
On the 11 February the BBC reported that four tourists were rescued from the top of Ben Nevis after they got in danger in a blizzard. The weather is

Best Camping Chairs in the UK for 2020 (May Update)
On camping trips, a log or tree stump can often become the go-to seat, but nothing gives you the much-needed support and comfort after a day of activities

What to Pack for a Walking Holiday? Top 10 List
Packing for a walking holiday is no different than any other trip. You need to account for the destination’s climate, possible weather changes and planned

How to Pack Light for Long-Distance Hiking
If you are planning a long day trek, or a multi-day trek, then you are going to have to carry some kit with you. How you pack for your trek can make a huge

BEST Water Shoes for the UK in 2020 (May Update)
With the summer season fast approaching, it won’t be long until you’re packing up and heading down to your nearest lake, reservoir or seaside destination

Best Hiking and Walking Boots in the UK for 2020 (May Update)
The most important part of your kit when you set off on the trail is a good pair of hiking boots. Everything else you can beg, borrow or steal but wearing

Best Power Banks and Portable Chargers in the UK 2020 (May Update)
For any outdoor adventurer, or really anyone that spends extended amounts of time away from a plug socket, a power bank is an absolute necessity. Power
©Copyright 2020 - trekaddict.co.uk