Travelling alone and without any external help, O’Brady astonished the world with the details of his adventure, which he called an ‘Impossible First’.

Antarctica is not exactly the perfect place for trekking. Being fifth in size among the world’s continents, its landmass of around 5.5 million square miles is covered by a vast ice sheet.

The continent is roughly divided by the 1,900-mile-long Transantarctic Mountains, with the east consisting mostly of an ice-covered plateau, and the west of an archipelago of several islands covered and connected by a consecutive thick layer of ice.

Antarctica’s ice sheet represents about 90 per cent of the earth’s total, with an average thickness of 1.5 miles, making it a highly inhospitable environment. 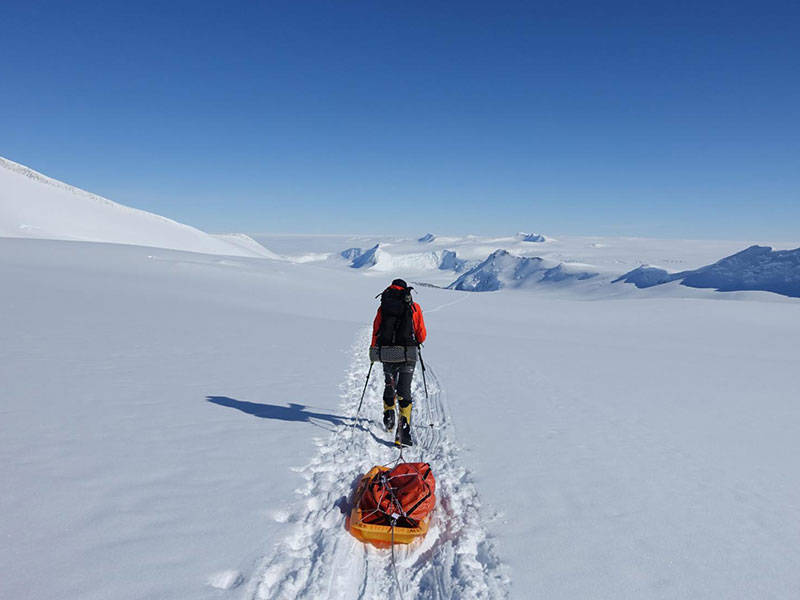 Land life is limited to a handful of specially-adapted land plants and animals.

Besides, Antarctica is by far the most remote and inaccessible continent and its climate the coldest on Earth, making O’Brady’s feat all the more impressive.

Ground temperatures have been measured as low as −93.2 °C! The weather in Antarctica is also extremely dry.

Whilst in the last few decades, several mapping expeditions have broadened our knowledge of Antarctica’s landscape, a great number of glaciers, ranges and peaks remain still largely unknown.

In addition, the ice-choked and stormy seas surrounding the continent make it difficult for research vessels to remain in the area for long. Still, several agencies specialise in taking tourists in some of its more ‘genial’ areas, and interest for the region has never been higher.

Obviously, O’Brady’s idea of crossing unaided this frozen desert was met with disbelief and serious concerns about his health.

O’Brady wasn’t the first explorer to attempt this venture.

In fact, several others have successfully trekked the continent alone but were always supported with food supplies dropped along the route.

Others have made it using kites and the force of polar winds, thus saving energy and gaining speed.

O’Brady, on the other hand, made the trek without any external help whatsoever and using nothing but his own power.

The expedition was solo, unsupported, and unaided by the wind.

MAGNIFICENT SOLITUDE. The last few days I have shared video clips showing some of the storms and emotional hardships I went through in Antarctica 🇦🇶. Today I wanted to share the yin to that yang and expose the calm and expansive beauty of this journey. After battling storms, it was always a welcome moment when the wind calmed, the clouds cleared, and the sun lit up the seemingly endless white horizon. It was often in these moments when I found my deepest flow states as I wandered alone through the world’s most untouched and pristine wilderness. Where/when do you find your deepest flow and calm? #TheImpossibleFirst #BePossible

The dangers in such an undertaking are immense.

In 2016, a British explorer attempting a similar adventure almost died and was forced to ask for help just 30 miles before reaching the end of his journey. Another attempt ended the same way a year later.

A major issue for O’Brady’s team was, of course, adequate nutrition.

O’Brady would have to carry all the necessary provisions, which had to be calculated as precisely as possible, to avoid the burden of unnecessary weight.

He used a sledge to carry all his provisions:

His team of nutritionists estimated a consumption of around 10,000 calories per day, which, combined with the days required for the crossing, translated to a considerable overall packing weight, at least for the first few days.

O’Brady thought it would be a good idea to add some friendly competition to the whole endeavour – as an extra incentive as well as a psychological ‘crutch’ in times of mental and physical strain.

Louis Rudd, O’Brady’s friend and seasoned explorer, decided to embark on the same venture, travelling apart but communicating with each other.

Let it be noted that accepting any kind of help and material support after their departure would immediately nullify their claim of making the crossing unaided.

The two explorers wouldn’t be able to ask help even from the permanent scientific station based on the south pole, despite the fact that it would take them several days to reach it.

When Mind Proves Mightier than the Body

The two men set off together on 3rd November, and soon Rudd took the lead.

Yet, by Christmas Day O’Brady had left his friend around 80 miles behind.

Moving at a staggering pace, he reached the south pole on December 12th, having covered 572 miles of a thick-iced desert.

After a short break, he set off for the rest 360 miles of his journey. 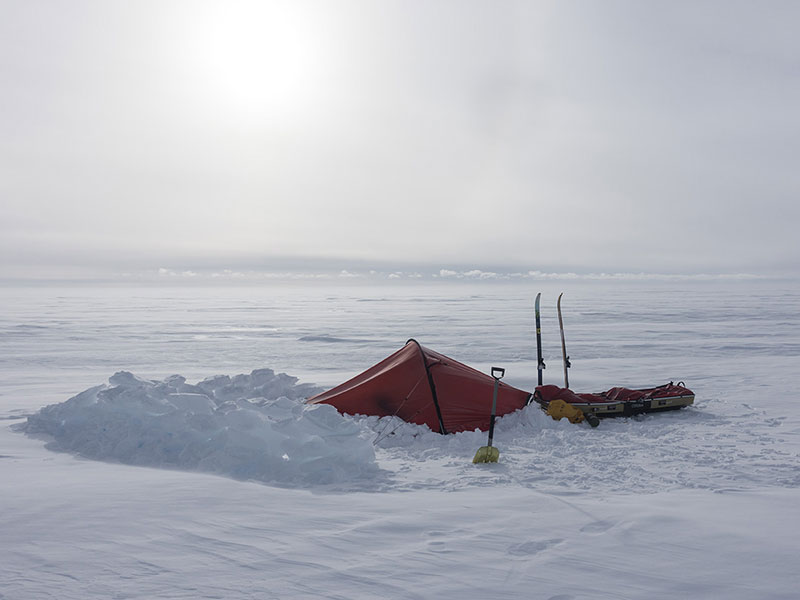 The second part of his venture was, as expected, much harder.

O’Brady admitted that he pushed his body to its limit, battling loneliness, hunger, the freezing temperatures and the cold that penetrated his clothes.

Sometimes, the snowfall was so thick that forced him to push through with almost zero visibility, over a largely un-mapped terrain.

The excessive effort began to take its toll on O’Brady’s body. In one of his posts on Instagram, he admitted he had lost a ton of weight and was afraid to take a close look at his body.

The aggravated loss of weight made the freezing temperatures even more nerve-wracking. Eventually, O’Brady put black tape on his nose and cheeks to protect them from frostbite.

Still, there were moments of joy and beauty that helped to sustain and motivate him during his intense hardships.

O’Brady said that marvelling at a circular rainbow glistening over his head was a stunning sight, filling him with awe and inspiration.

On top of that, Paul Simon, the famed American musician, was thrilled when he learned that his album ‘Graceland’ was helping O’Brady make it through his arduous trek, that he decided to give him a call and encourage him further.

Day 40: SOUTH POLE!!! I made it!!! What a day. I expected to be happy reaching the South Pole, but today has quite honestly been one of the best days of my entire life. It was whiteout conditions approaching the pole as it’s been for days. I spent about an hour there – taking photos and soaking in the moment before continuing onward. I am deeply honored to be adding to the 100 year lineage of the @explorersclub flag. Just having that fabric in my hand at the pole, knowing all of the other hands it’s touched over the generations, gives me chills. Shortly after leaving the pole the sun came out and I was overcome with one of the deepest feelings of happiness and calm that I have ever experienced. I truly felt I was tapping into all of the love that was being sent my way from all over the world. Deep, deep, deep gratitude – I’m shining my love right back at you. Some perspective on today’s accomplishment (which for me feels completely humbling, putting me in rare company.) Only 28 people before me have completed coast to pole crossing; skied from the coast of Antarctica to the South Pole, solo, unsupported (no resupplies), and unaided (no kites). Only 2 people before me have done so on this route. For all of these people the South Pole was a very worthy finish line, but I still have unfinished business as I try to be the very first to complete a full traverse and reach the opposite coast. Onward!! #TheImpossibleFirst #BePossible

By Christmas, O’Brady was very close to his final destination – the Leverett Glacier on the Ross Ice Shelf.

While exhausted physically, his resolve was stronger than ever and decided to make a final push, covering the final 78 miles in just 32 hours – a trekking sprint without precedent in Antarctica.

Day 53: THE BIG PUSH: ANTARCTICA ULTRAMARATHON. I woke up this morning about 80 miles away from the finish line. As I was boiling water for my morning oatmeal, a seemingly impossible question popped into my head. I wonder, would be possible to do one straight continuous push all the way to the end? By the time I was lacing up my boots the impossible plan had become a solidified goal. I’m going to go for it. I can feel it in my body that I am in the zone and want to harness that. It’s a rare and precious feeling to find the flow. I’m going to push on and try to finish all 80 miles to the end in one go. Currently, I am 18 hours and 48 miles into the push. I’m taking a pit stop now to melt more water before I continue on. I’m listening to my body and taking care of the details to keep myself safe. I called home and talked to my mom, sister and wife – I promised them I will stop when I need to. Only 35 more miles to make The Impossible First POSSIBLE. A very merry Christmas to all. Stay tuned… #TheImpossibleFirst #BePossible

His decision to keep on without sleep for more than a day worried his wife and expedition manager and other relatives and friends who monitored his progress and communicated with him frequently.

Finally, on December 26, his feat was finally complete.

Best Foldable Camping Beds for the UK in 2020 (July Update)
Taking a camping trip shouldn’t leave you dreading a series of poor nights’ sleep. Having a decent folding bed as part of your camping gear will make

Best Lightweight Camping Stoves for the UK in 2020 (July Update)
When you’ve been out on the trail for hours, or if you are camping overnight, it is nice to be able to have a hot brew or something warm to eat. No matter

Best Hydration Bladders for the UK in 2020 (July Update)
The human body is made up of 60% water and we need two litres of the stuff on a daily basis just to continue functioning normally. If you’re hiking,

Best Handheld GPS Units for the UK in 2020 (July Update)
For urban exploration, a smartphone will do the trick but once you're out of cell range, a handheld GPS is what you need to keep you on track. GPS devices

Best Satellite Messengers and Personal Locator Beacons for 2020 (July Update)
Although it’s nice to unplug and truly immerse yourself in nature, it’s important to have some sort of communication device with you should anything go

Best Summer Hiking Gloves in the UK for 2020 (July Update)
Hiking is an all-weather, all-season activity - as long as you have the correct kit. Light gloves are a crucial part of your gear, as they provide a

Best Hiking Poles for the UK in 2020 (July Update)
Whether you’re a rambler, a backpacker or a seasoned trekker, you may not yet have adopted hiking poles as an essential part of your kit – but there are

Best Compasses for the UK in 2020 (July Update)
For hikers, backpackers and survivalists around the world, the compass is old world tech that continues to thrive in the modern age thanks to its trustworthy

Preparing for Your First Big Climb
There are few things in this world more fulfilling than being able to climb and stand on top your very first mountain. Even though it can be physically
©Copyright 2020 - trekaddict.co.uk